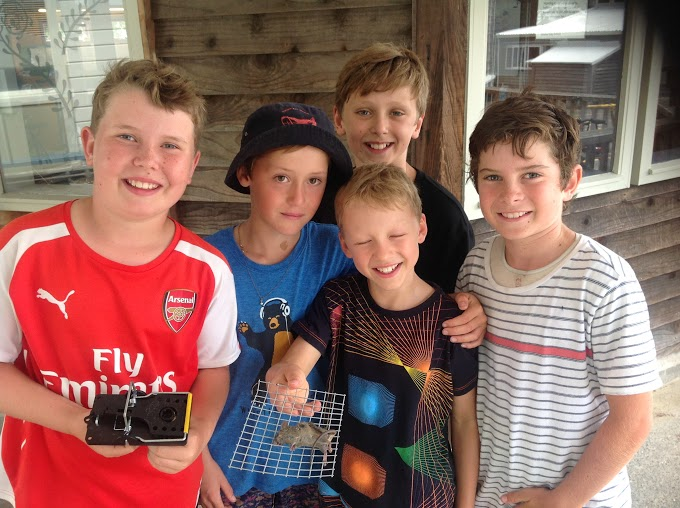 Watch out pests!  You might as well pack your bags and move to a different planet.  This mouse has met our trapping team and I bet you he wishes he had made the move yesterday!
Posted by john at 17:53 1 comment:

Email ThisBlogThis!Share to TwitterShare to FacebookShare to Pinterest
Labels: Trapping 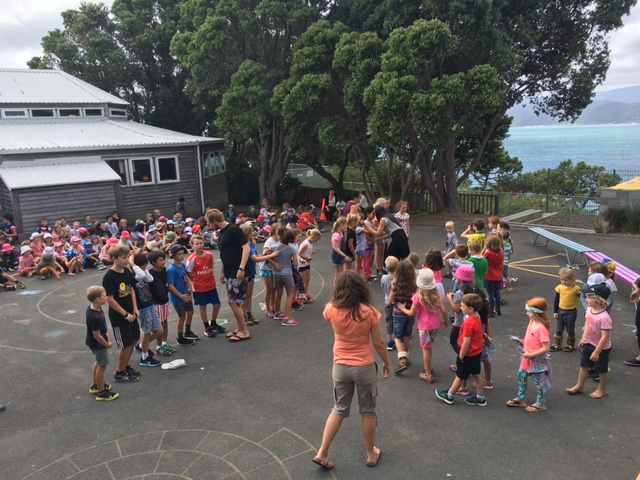 
We are working hard on our Haka and Waiata for the Powhiri.  The stamping feet are making the earth tremble and dust is sent up to the sky in clouds. Our voices can be heard ringing from the clifftops, drifting out above the waves.


The Powhiri is a fantastic occasion, welcoming new whanau to our school.  It is a time where we come together, acknowledge the past and the stories of the people who have come before us.  For example did you know that this is the place where Ngai Tara, the first long term inhabitants of Te Whanganui a Tara, lived?  It is their Pa and we celebrate that fact.


It takes some time and a whole lot of energy to get it right but we are willing.  We are looking forward to meeting you all.


To the kids who are leading the Haka and Karanga, to the teachers and parents who are having a new experience we say: Kia Kaha, Kia Manawa Nui

On Wednesday a group of 45 students went to the Eastern Zones Cricket tournament. It was lots of fun with some of us experiencing cricket for the first time. We saw fantastic team work and support amongst the Worser Bay students.

A big thank to the parents who umpired, scored, cheered and organised. We wouldn't have been able to offer this opportunity without your help.

What a great day to be outside moving about.

On Monday 22 February, we went for a school trip past Worser Bay and Seatoun Beach. We stopped along the way at the pou at Seatoun beach. We heard stories about Kupe and the wheke and how his nieces (Matiu and Makaro, the names of the big islands in the harbour) scratched themselves in mourning after they believed Kupe had died so much that they bled and the rocks at Red Rocks turned red from their blood. We walked up the hill to the pa site with another pou and sketched our surroundings.

Deb (Elliot's mum who is a geologist) talked to us about how the land around us had changed over time and how the big rocks that came from the Hutt river transformed and became smaller and smaller and smoother until they became sand.

Once we walked around the corner from Breaker Bay we set up our metre squared. In our learning groups we laid out our metre squared and looked carefully and lifted up rocks to find animals and sometimes we saw little things moving under seaweed so we moved the seaweed. We recorded what types of sea life we found different types of - starfish, crabs, mussels, baby paua, limpets, sea cucumbers, sea snails and seaweed. We found a lot more life than we expected in 1 metre squared. We were amazed, astonished and proud that we found so much more than we expected to find!

We want to do some more metre squared investigations - you should try it too! Thanks to all the people who came out and helped us to achieve this learning experience.

Posted by Nicola Stevenson at 09:01 No comments:

Preparation for our trip towards Breaker Bay

We have been working on measuring things in maths. Tomorrow we hope to get down towards Breaker Bay and be part of the Marine Metre Squared project as part of which we will examine carefully what is living in a square metre of our coastline.

This week we have been learning about identifying and classifying the types of flora and fauna we found on our trip to Worser Bay rock pools last week. Today we problem solved in groups how we could use string and rulers to work out how big a metre squared really is and come up with some ways of helping us recreate it on the beach tomorrow.

We had to measure four lots of one metre accurately with a ruler then identify each metre on our piece of string. We hope the weather will hold up and we'll be able to explore our coastline tomorrow! On Monday the 15th, two visitors from Zealandia came to talk to us about trapping and what pests are. They brought with them a bird house and four traps for mice and rats. The bird house was a gift to us because a group of girls, Emma S, Emma M, Josie, Betty Jo and Danielle set up a fundraiser for Zealandia. They gave a cheque to staff at Zealandia during the last week of school last year. It will be interesting to see whether the nesting box will attract any visitors? Did you know that some birds don’t make their own nests. Kaka and Ruru (Morepork) are two such species living within the Wellington area. Which of these birds is most likely to be first to set up house at Worser Bay School? What will happen if Sparrows try to move in instead? We had a really great time learning about pests, different types of birds and where they live. Posted by Nicola Stevenson at 18:43 No comments:

Email ThisBlogThis!Share to TwitterShare to FacebookShare to Pinterest
Labels: conservation, What's in My Backyard., Zealandia

What's Growing in the Garden?

All this hot weather is good for growing Zucchinis! 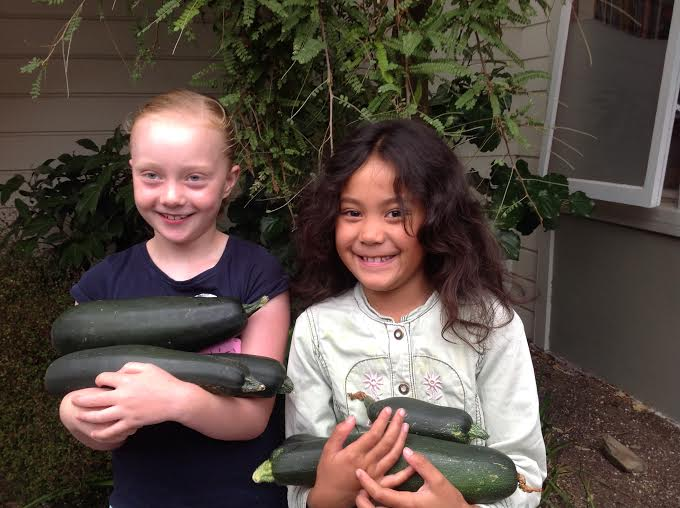 Or are they Marrows? Wait, I just thought of a joke-

When does a Zucchini become a Marrow? If you don’t pick them; until toMarrow.
It has been exciting to see things growing in our new garden.  The peas have been popular because they are delicious.  There are some beans too and of course these Zucchinis/Marrows.


What shall we do with them?  Leave a comment with your suggestions.
Posted by john at 21:16 1 comment:


Would you trust these guys? 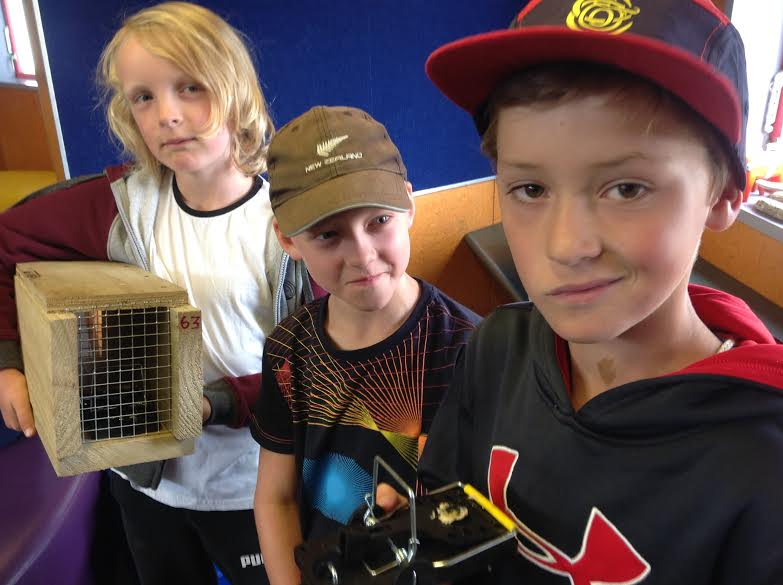 Do you like peanut butter? Well, if you do make sure you don’t put your nose into this box; you might get it squashed in a trap!
We have been gifted four trapping boxes by the staff at Zealandia so that we can try to eradicate all of the pests harming native habitats.  Did you know that Hedgehogs can eat up to 40 Weta in just one night?  Not only is this greedy but we need those insects for a healthy ecosystem.
Last year when we did some research around the school and down the bank we discovered that there were very few insects at all; a sure sign of rodents and other pests.  If we are pest free, the future might see naturally regenerating bush and many more birds in our trees, including the insect loving Ruru, living in our nesting box.


With our trapping team on the loose the future looks bright!
Posted by john at 20:52 1 comment:

What's in the Rock Pool?


We had a great time exploring our rock pools. We were amazed to find so much different flora and fauna. It sparked lots of questions and ideas for getting into the inquiry. Our next step is in researching what some of these creatures are and classifying them like scientists.

Do you know what these are?


Thank you for the great turn out on Tuesday night.  It was very impressive considering the amazing evening and how inviting the sea looked from our view-point on the hill.


We asked, How do you see your child flourishing within the framework of our Worser Bay School Curriculum Document?  We are very excited about the document which succinctly expresses our approach to learning and the philosophy which supports the emotional, spiritual, physical, social and academic growth and achievement of our children.  Although the document has been available on the school website for some time, Tuesday’s meeting was a kind of unofficial ‘unveiling’. 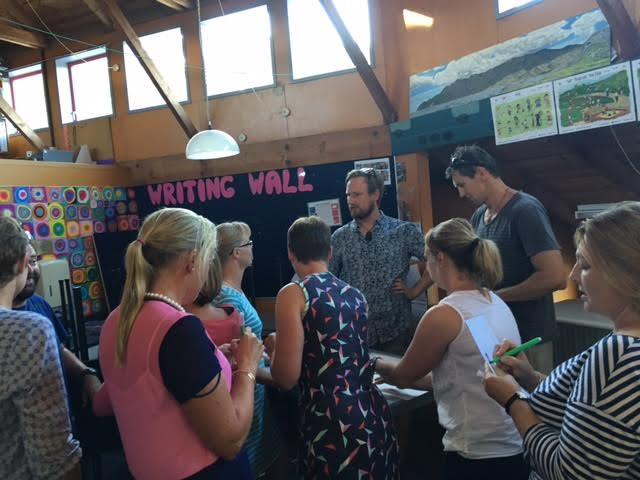 Comments and responses to the question posed are as varied as the learners the document represents.  Here are a sample of responses:


There is a palpable sense of excitement within the Mahutonga Matariki area.  Our students are buzzing, ready for the challenges and hard work which are part and parcel of profound learning.  It is heartening to see this come together in a practical sense, kids engaged in their learning while philosophically it is encapsulated in this curriculum document.


As we all become more familiar with it no doubt you will think of other responses.  Please share these with us as you see fit.
Posted by john at 13:28 No comments: 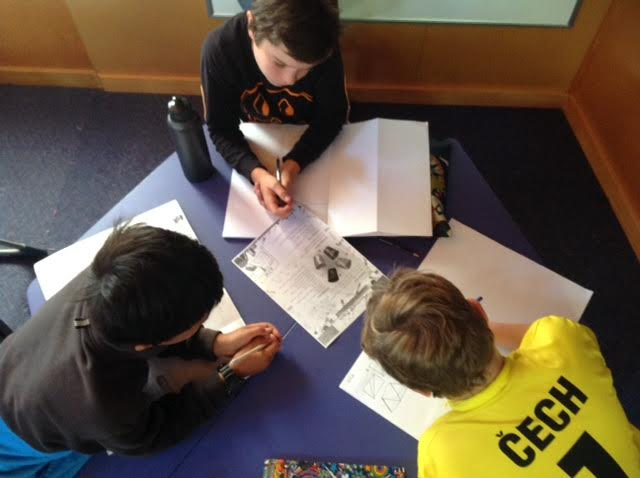 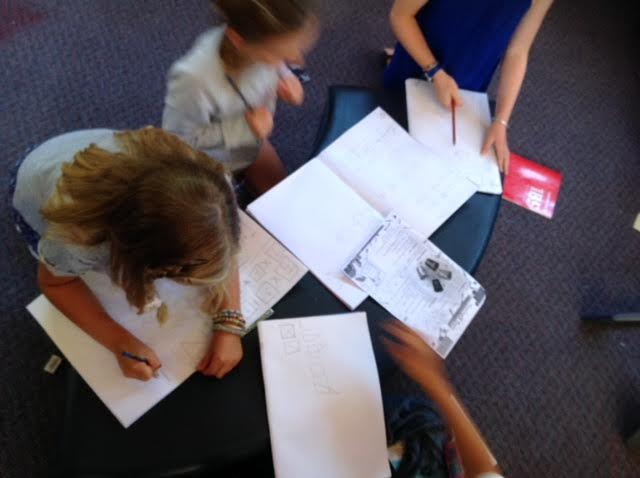 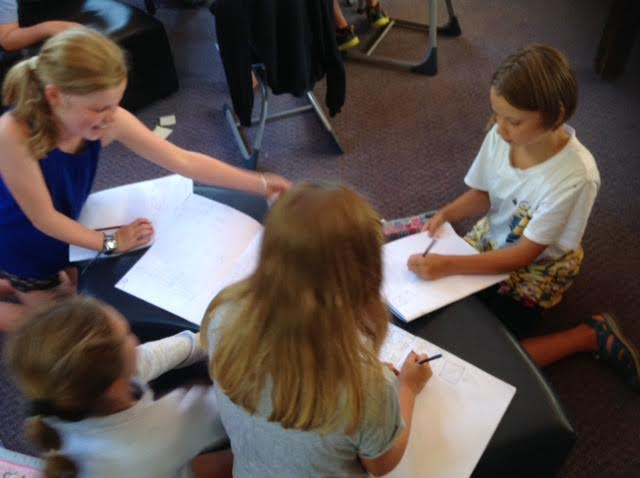 We have been getting stuck in to new learning in Maths.  Here you can see students involved in collaborative problem solving exercises.  We have been discussing and practicing different strategies for solving complex problems.  Some of the methods we have looked at already are Trial and Improvement (formerly known as Trial and Error) and Drawing a Diagram.  Some students actually made a model of one problem.
What does Problem Solving require?


Kids comments……….
What have you found out about Problem Solving?


We are very excited to have begun our Inquiry with a trip to stunning Worser Bay Beach on Wednesday. This was the first activity in Tuning in to this Inquiry. (Read more about it on the blog post What’s in The Rockpool?)


This year the theme is ‘Change’.  We will begin by exploring some of the change evident in our immediate environment.  We have already been able to make strong connections to the work we did last year, using the words Flora and Fauna to describe the plant and animal life we have observed.  There is a strong science focus.  We are encouraging students to be observers, to look closely and carefully and to ‘look’ with all of our senses.  It was interesting to see that some people tried eating some of the seaweeds today.  They were ‘observing’ with their taste buds!


We will be doing some detailed ‘Finding Out’ about particular species which live in the tidal zone.  We will then move to a Scientific Investigation in which kids will be able to predict, observe, explore, test and come up with their own explanations of the phenomena which they are investigating.  This will be very ‘hands on’. 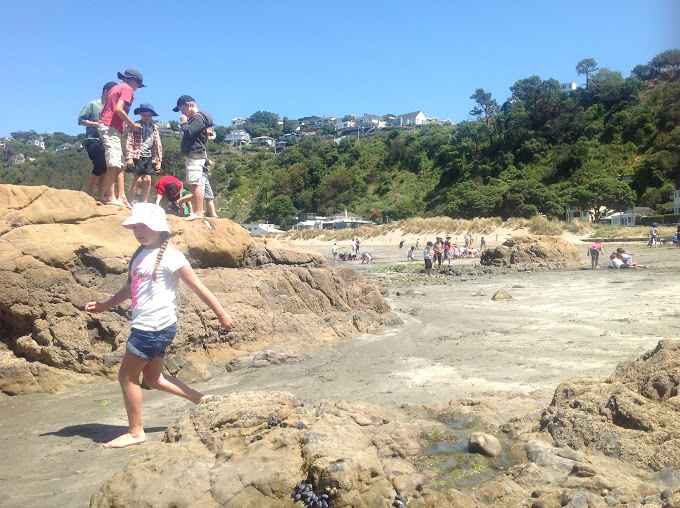 Of course this means more time at the beach!  And, because we will be there we are planning to do more sailing and kayaking, taking advantage of the brilliant weather we have been having.  More on this later.

How Big is Your Stride?

We've started looking at measurement through estimating then measuring how many strides we take in 10 metres. We learnt to measure 10 metres and then counted our paces. There was quite a variety of step sizes - some people took 12 steps in 10 metres and others 28, but most people took about 20 steps.

Next we'll use this information to work out how long our steps are in both metres and centimetres.

Email ThisBlogThis!Share to TwitterShare to FacebookShare to Pinterest
Labels: maths

We've been practising our co-operative skills in our learning groups by creating a game with two balloons. There were some varied and creative games that the groups came up with, ranging from: can you find the nose on a moving balloon while blindfolded?, guess who's holding the balloon, and whose balloon will zoom out of air the fastest? We had to practice talking and listening to each other's ideas and communicating our ideas to others.

We Are Collaborators!
We have been thinking about the attributes of effective learners when we work in groups.  Are this group doing all of the things you would expect to see when people are cooperating, using all their strengths and helping each other with learning? 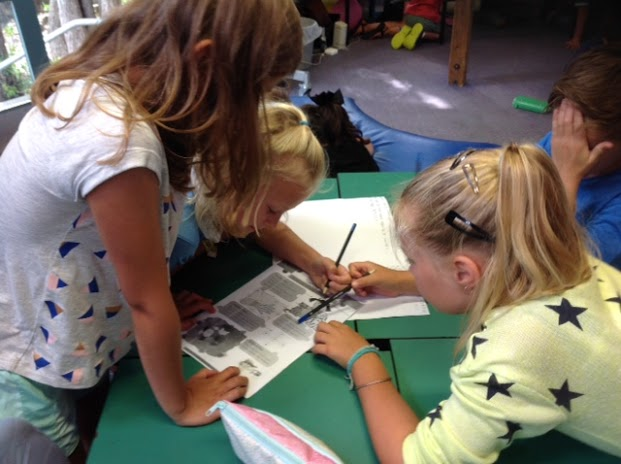 
What do you think would be a good goal for collaboration?
Posted by john at 13:17 No comments:

Delicious Sultanas, or not..... 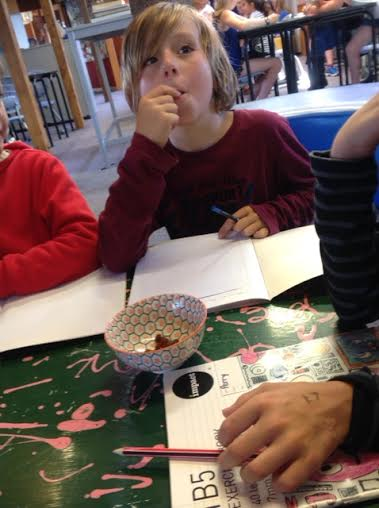 Email ThisBlogThis!Share to TwitterShare to FacebookShare to Pinterest
Labels: Being in the moment, observation, Sultanas, writing