Dr Jane Goodall Visits Miramar. And we were there!

Dr Jane Goodall, the famous scientist and environmentalist has been visiting New Zealand over the last week or so.  She spoke at the Michael Fowler Centre a few nights ago, then today she planted some trees with us in Centennial Reserve.
Adam and Mitchell chose some trees to plant from our nursery/shade house.  They were Kohekohe, which in the past would have formed the bulk of the canopy in the Wellington/Te Whanganui-a-Tara area. 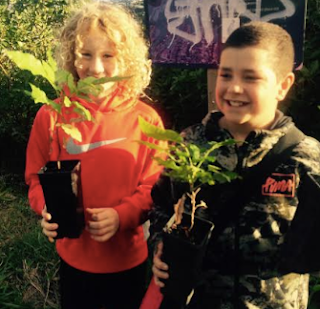 Mitchell and Adam with their Kohekohe.

Joakim from Te Motukairangi  restoration group spoke to Jane and explained the work that the group are doing in the area.  They have planted 15 000 plants in the area during the last 8 years.  Phenomenal work! And, we have been part of that journey now for the last four years. 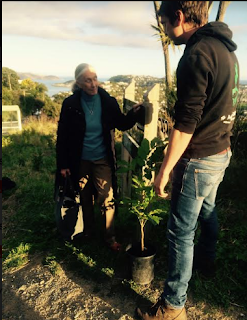 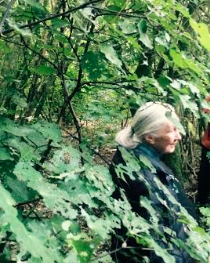 We ended up planting seven or eight Kohekohe alongside the track, with Mitchell and Adam doing most of the spade work.  It is great to see the satisfaction they get from this type of work.
Joakim told us all that Wellington City is the only city in the world in which biodiversity is increasing.  This is a result of the passion and hard work which so many people engage in.